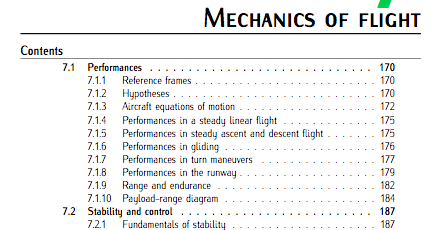 Mechanics of atmospheric flight studies aircraft performances, that is, the movement of the aircraft on the air in response to external forces and torques, and the stability and control of the aircraft’s movement, analyzing thus the rotational movement of the aircraft. The study of performances, stability, and control plays a major role in verifying the design requirements. For instance, one must be able to analyze the required power for cruise flight, the required power settings and structural design for climbing with a desired angle at a desired velocity, the range and autonomy of the aircraft, the distances for taking off and landing, the design for making the aircraft stable under disturbances, and so on and so forth. The reader is referred to Franchini and García [2] and Anderson [1] as introductory references. Appendix A complements the content of this chapter.