The Air Traffic Management (ATM) System is undergoing a paradigm shift aiming at enhancing its environmental impact, capacity, safety and efficiency. Different world-wide programmes are fostering this transformation, mainly the Single Sky ATM Research (SESAR) in Europe and Next Generation Air Transportation System (NextGen) in USA, yet also in the Asia/Pacific region, the Collaborative Actions for Renovation of Air Traffic Systems (CARATS) in Japan and the New Generation ATM System (CNAS) in China.

Improvement in the ATM system predictability has been identified as paramount to achieve the above-mentioned high-levelgoals All ATM system actors, including pilots, air traffic controllers, airlines, dispatchers, air navigation service providers, meteorological offices, and the Network Manager, are daily facing the effects of uncertainty. Should the capacity of the system be increased while maintaining high safety standards and improving the overall performance, uncertainty levels in ATM must be reduced and, when possible, find new strategies to deal with and eventually reduce it.

Uncertainty in aircraft trajectory planning and prediction generates major challenges for the future air traffic management system. Therefore, understanding and managing uncertainty will be necessary to realize improvements in air traffic capacity, safety, efficiency, and environmental impact. For instance, it is well-known that sector’s capacity is under-declared due to uncertain entry/occupancy counts, thus limiting the capacity of the system. Also, adding unnecessary fuel leads to a non neglectable loss of efficiency, e.g., Hao et al. in [1] conclude that 1 min in reducing flight time dispersion could save between $120 to $452 millions per year only considering US domestic airlines.

Meteorology (in particular, winds) represents one of the most relevant sources of uncertainty. In the present research line, a framework based on optimal control has been introduced to address the problem of robust and efficient trajectory planning under wind and convective forecast uncertainty, which is modeled with probabilistic forecasts generated by ensemble prediction systems. The proposed methodology is applied to a flight planning scenario under a free-routing operational paradigm and employed to compute trajectories for different sets of user preferences, exploring the trade-off between average flight cost and predictability. Results show how the impact of wind and convective forecast uncertainty in trajectory predictability at a pretactical planning horizon can be not only quantified, but also reduced through the application of the proposed approach.

Thunderstorms represent a major source of disruption, delays and safety hazards in the ATM system. They are challenging to forecast and evolve on relatively rapid timescales. Even for the most advanced met products (which most stakeholders lack of), thunderstorm forecasts are provided in a deterministic manner. Both met provision and ATM use of met information need to consider the uncertainty in the forecasted evolution of these phenomena.

Convective weather conditions create major challenges for the ATM system. Since flying through a thunderstorm entails multiple risks (among them: strong turbulence, wind shear, downbursts, icing, lightning and hail), aircraft must stay clear of them if possible and pilots are thus led to deviate from their flight plans when thunderstorm activity is present. These deviations, when aggregated over multiple flights, amount to significant air traffic disruptions and capacity reductions that must then be managed by ATC and ATFM authorities, often by holding, delaying or cancelling other flights. As illustration: In 2017 –according to PRR’17- weather phenomena were the cause of 23.2% of ATFM en-route delay (52.2% for Airport ATFM delay) in the European Civil Aviation Conference (ECAC) airspace, adding up to around 4.8 million minutes of delay (en-route & airport) with an estimated cost of 491 million €. For the same year in the US, the data from the FAA’s OPSNET portal – https://aspm.faa.gov/opsnet/sys/Delays.asp- attributes around 60% of the delays greater than 15 minutes (which represent a total of 22.6 million minutes) to weather. Convective weather is one of the leading causes, with almost half of weather related delays in the busy summer months being caused by it. 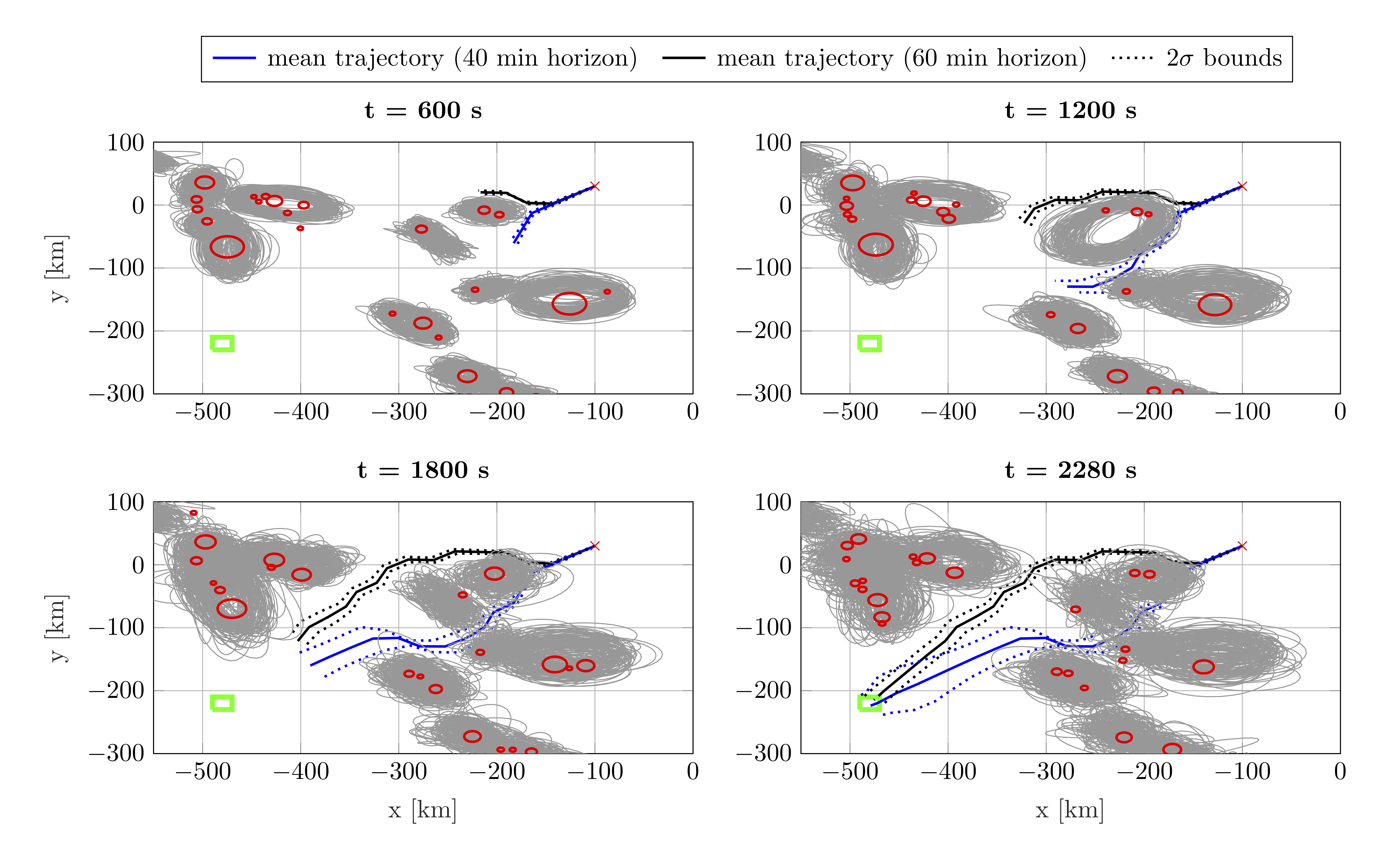 Delays due to convective weather are very disruptive on the air traffic system. Current aviation weather products are limited in their ability to forecast convective weather at
timescales required for air traffic flow management planning. Despite improvements in meteorological forecasting tools, operational use of weather data has been slow to adopt. We demonstrate how machine learning can help to better predict convective areas at time horizons up to 48hrs. We integrate data from numerical weather prediction tools and satellite observations of convective cells to train a neural network to identify convective regions.